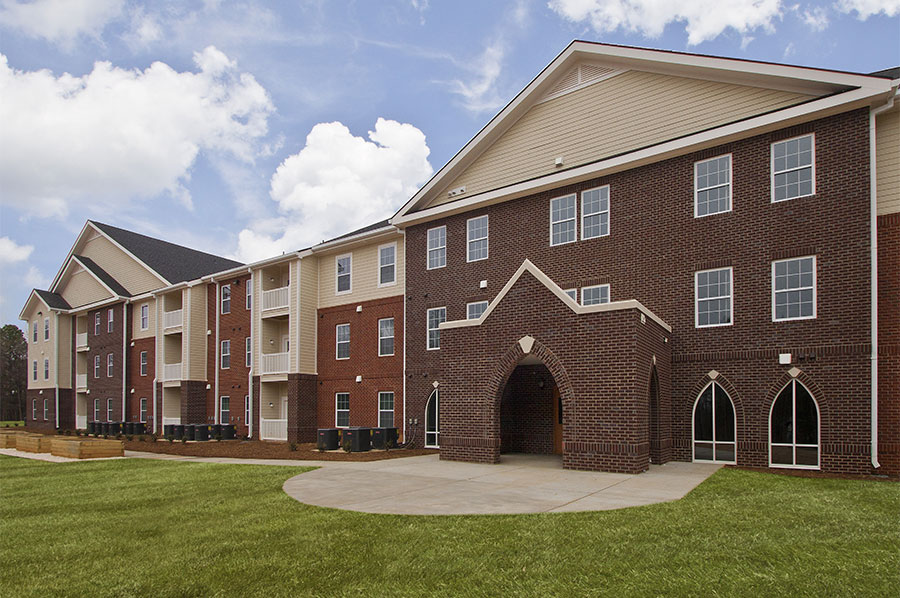 Charlotte, N.C. April 23, 2014– Laurel Street Residential, private developer in partnership with the Belmont Abbey Benedictine Monastery, proudly announce the grand opening of the Loftin at Montcross, a mixed-income, senior living community, to be held on Thursday, April 24, 2014 at 2:30 p.m. The community, located in Belmont N.C. was named to pay homage to late former Belmont Mayor, Kevin Loftin. The celebration will include a dedication to the former Mayor and remarks from Mayor Charlie Martin, Senator Kathy Harrington and Bob Kucab from the North Carolina Housing Finance Agency.

“Our aim is to utilize our property to fulfill development initiatives to benefit our local community and college,” said Abbot Placid Solari of Belmont Abbey Benedictine Monastery. “We’re so pleased to be able to provide a development that is consistent with the intent of the monastery to provide quality housing for seniors, so that they can affordably live with a healthy, connected lifestyle with dignity.”

The apartment community consists of 72 one and two bedroom, mixed-income units that are housed in a mid-rise equipped with elevator access. Building amenities include a multi-purpose room, exercise room, computer center, several lounge areas, management offices, a maintenance shop, covered entry and laundry facilities, along with external amenities that include raised bed garden plots, a gazebo and outdoor sitting areas.

The community officially opened its doors in February to its first residents. As of the grand opening event, 66 of the 72 units will be occupied with elderly singles and couples. Only 6 1-bedroom units remain at rents of $620 per month. Apartment units, which range from 670 –903 square feet, include a fully equipped kitchen, pantry, spacious closets, patios and balconies. The pet-friendly community offers convenient access to the neighboring Abbey Plaza Shopping Center along with nearby Wal-mart, Lowe’s Home Improvement and a Charlotte Area Transit System Park and Ride location.

“We are excited to present Loftin at Montcross Apartments which provides seniors with fixed incomes a new home with easy access to practical amenities to enhance their overall quality of life,” said Dionne Nelson, principal of Laurel Street Residential. “We are delighted by the end result in Loftin at Montcross and are pleased to pay homage to Mayor Loftin for his contribution to the Belmont community.”

All of the rental units in the new community are privately managed by property management company, S.L. Nusbaum, which is leading the leasing efforts that started in October. People who would like to receive more information can email the property manager at montcrossapts@slnusbaum.net or call toll free at 866-656-5464 to hear about move-in specials.

The grand opening celebration will include a dedication to the community’s namesake, former Belmont Mayor, Kevin Loftin, who was killed in a traffic accident on Feb. 22, 2012. The monastery and Laurel Street Residential chose to name the community to honor Loftin who served as the mayor of Belmont from 1992-1997. He was a driving force in the revitalization of downtown Belmont and was always dedicated to working to improve his community. Prior to becoming mayor, Loftin worked in the textile industry for over three decades.

“It’s an honor to be a part of a wonderful community event to honor Mayor Loftin,” remarked current Belmont Mayor Charlie Martin. “Kevin did great things for the city of Belmont and I am humbled to be able to pay tribute to him in this way.”

Mr. Loftin’s family plans to attend the event and receive a plaque to honor the dedication of Loftin at Montcross.

The apartment community was built by MCIII as general contractor, on land that is owned by Belmont Abbey. The three-story, 79,000-square-foot building provides fixed-income seniors affordable housing based on income. WGM Design was the architect and focused on integrating key design elements that cohesively blend the development with the architectural history of Belmont and the Montcross community.

Loftin at Montcross received an allocation of $615,500 in annual federal housing tax credits and a $1 million Rental Production Property (RPP) loan from the N.C. Housing Finance Agency. In exchange for the tax credit, Laurel Street Residential has agreed to maintain affordability to lower income residents for a minimum of 30 years. Bank of America Merrill Lynch has purchased the federal housing credits, providing $6.2 million in equity to the project. Bank of America Merrill Lynch also provided a $5.8 million construction loan to the project.

In addition, Belmont City Council supported the project’s request to pay deferred water and sewer impact and development fees through property tax revenues. Laurel Street Residential will provide City of Belmont residents with preference on the wait lists for leasing.

Montcross is primarily owned by Belmont Abbey, which is a Benedictine monastery founded in 1876. One of the primary purposes of the development is to provide financial support for Belmont Abbey College as well as to benefit the local community. Over their extensive 133 year history, the Monastery has assembled and preserved approximately 700 acres of land, of which 50 acres are used by the Monastery and College.

Parkdale Mills owns several parcels within Montcross, which were originally purchased in 1987 from the former owners, the Lineberger Family. Two textile plants and a warehouse, along with approximately 100 mill homes sat on approximately 120 acres. In the mid 1990’s, half of this land was folded into what is now The Oaks Commerce Center. The mills, houses and warehouse were torn down in 2006 to make way for a Flex campus component of the Montcross development. Steelwood Solutions serves as real estate consultant for Belmont Abbey and represented the land owner in the Loftin at Montcross transaction.