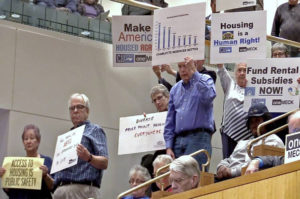 Their criticism drew a sharp rebuke from Democratic Mayor Vi Lyles, whose main campaign pledge was to build affordable housing. Lyles believes the city should also build housing for people earning 60 percent of the area median income, which would be a salary of about $43,000 for a family of four.

Lyles, who was frustrated, shot back at the council members: “I am beginning to wonder if we believe in upward mobility.”

In the end, council members gave their blessing to 11 new affordable housing projects that could receive money from the Housing Trust Fund.

The 11 projects have asked for a combined $24 million money from the trust fund, which only has $6.8 million. The city believes, however, that it has enough to pay for them.

The reason is that most projects must compete for state tax credits, and most won’t receive them. To bolster the fund, the city shifted nearly $2 million from a low-income housing project on Weddington Road that’s been stalled by litigation.

Lyles has said the city should ask for $50 million for the fund, a large increase from the usual $15 million that voters are asked to approve in bonds every two years.
Republican council member Ed Driggs said the council needs direction from City Manager Marcus Jones about whether the city will seek the $50 million bond.

“The truth is, at this point we are emptying the piggy bank and we are reaching for the credit card,” he said.

After the Keith Scott protests in September 2016, the city has scrambled to fulfill a council pledge to build or maintain 5,000 units of affordable housing in three years as opposed to five years.

Two of the projects are likely to be built because they are applying for a less-competitive tax credit. They are the Brookshire Boulevard apartments by Laurel Street Residential and a complex on 924 W. Sugar Creek Road by Mosaic Development Group.

But those projects aren’t required to have apartments set aside for people earning 30 percent of the area median income or below, which is the area of greatest need. The developers of the Brookshire Boulevard have said they would voluntarily set aside 20 of 96 apartments for the city’s poorest.

Democratic council member Matt Newton said he was concerned about supporting those projects because the city would be spending money “to not solve the problem.”

Democratic council member Justin Harlow also said he was concerned there was no firm commitment for people earning 30 percent or less of the median income.

Their comments drew a rebuke from Lyles, who defended city staff’s vision of helping not only the poorest residents, but those earning 80 percent of the area median income or less.

Five of the projects needed waivers from the city’s housing locational policy. That policy was designed to ensure subsidized housing was not clustered in poor areas, but council members in recent years have been usually willing to approve those waivers.

None of the projects are in south Charlotte’s affluent “wedge,” where there is little subsidized housing.

James Mitchell, a Democrat, said the city needs to revisit that policy.

“That waiver policy is outdated,” he said. “The citizens think, ‘you will protect us.’ ”

The vast majority of apartments would be for people earning 60 percent or below the area median income.

Here are the proposed projects:

Read the original article in the Charlotte Observer.