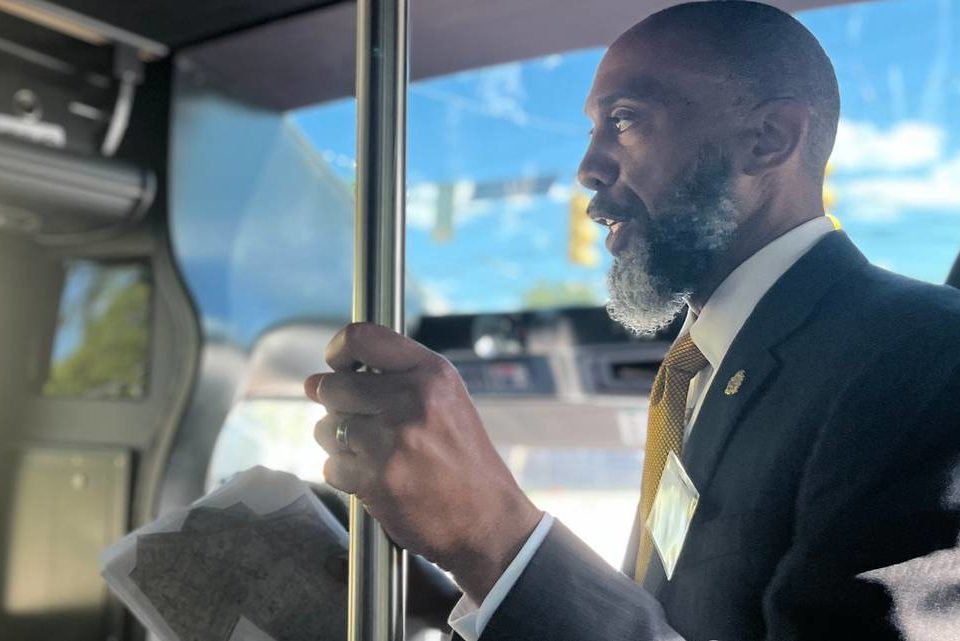 Mayor Elaine O’Neal has seen her hometown boom in recent years, a burst of growth that’s been exciting, but revealed some unpleasant truths. “You just have to look at Main Street, this street right here in front of us,” O’Neal said Monday afternoon on the grounds of a public housing complex on the eastern edge of downtown. “On one end of our Main Street, you see the high rises, the shops, the restaurants, the million-dollar condos that are now being sold,” she said. “And on the other end of Main Street, you see historic communities of color threatened by displacement in the face of rising housing prices and gentrification pressures.”

“This is $40 million folks,” he said. “It will have a transformational impact on the city of Durham.”

The money comes from the Department of Housing and Urban Development’s Choice Neighborhoods program, a 2010 initiative designed to help redevelop distressed public housing and improve the surrounding neighborhoods. It’s the maximum award for a project its size.

“We know it’s successful because people care about the neighborhood, care about the community, care about the people,” said Dominique Blom, HUD’s general deputy assistant secretary for public and Indian housing, who spent the day touring Durham. Price, a longtime congressman who is retiring at the end of this term, is chairman of the House appropriations subcommittee with jurisdiction over HUD. He said Choice Neighborhoods was inadequately funded during the Trump Administration. “I’ve been determined to revitalize this program because there’s nothing like it in the HUD portfolio. Nothing like it for comprehensive support for a community that wants to renew itself and develop across a wide area,” Price said. “We’ve more than doubled the funding from $150 million for the whole country in 2019 to $350 million this year.”

The project will replace 519 E. Main Street (formerly known as Oldham Towers) and Liberty Street Apartments, where some of the units are already boarded up. The properties, built in the late 1960s and early 1970s, today have 214 units, according to DHA. Residents are being relocated during the reconstruction, some temporarily and some to other DHA properties.

DHA and developer Laurel Street Residential will build 555 mixed-income housing units on 14 acres bounded by Main, Liberty, Elizabeth and Dillard streets. They’ll replace all the existing units to house people at 30% of the area median income. The rest will be a mixture of 30% to 80% AMI and market-rate units. Durham Housing Authority CEO Anthony Scott said the vision to integrate multiple income levels in public housing communities dates to the 1990s.

“So you create a balance. That balance does two things: there’s a socioeconomic advantage and then there’s also a financial advantage,” Scott said. “It means that these developments can be maintained more properly over time, as well as be able to handle any capital improvements that are necessary during their lifetime.”

Scott said demolition on the first phase will begin in about a month. “This is a very old building and it really carries a multitude of problems,” said resident Beverly Leslie, who said she was happy and excited. The federal money will be supplemented by local dollars to cover the total cost of $186 million.

DURHAM’S AFFORDABLE HOUSING BOND AT WORK Durham passed a $95 million affordable housing bond in 2019, the largest in North Carolina history, and $59 million went to the Durham Housing Authority for its Downtown and Neighborhood Plan. The plan is DHA’s $700 million 10-year road map for building over 2,500 rental units on land at several sites in and around downtown, including 519 E. Main St. and Liberty Street. “We have a long way to go. I mean a long way to go,” said Reginald Johnson, the city’s community development director. “But you know, when you have committed partners, it makes the road a little bit easier.”