A Greener Path for Charlotte’s West Side 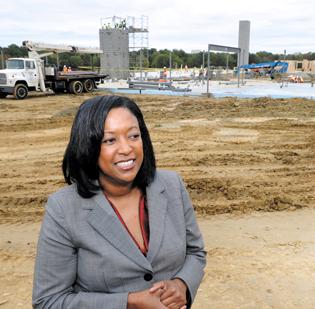 Developers are taking a holistic approach to The Renaissance, a sweeping $65 million redevelopment of the former deteriorating Boulevard Homes public-housing complex. The 334-unit community that will rise on the site will use sustainable building practices to anchor a mixed-income neighborhood with an on-site community school.

Laurel Street Residential, led by former Crosland executive Dionne Nelson, oversees development of The Renaissance’s residential core of senior and family housing. The community will be built to achieve LEED for Neighborhood Development certification, a comprehensive program from the U.S Green Building Council that looks at overall design. This week, Nelson’s team decided to seek EarthCraft certification for the living units. The development’s 14,000-square-foot community center also will be built to LEED-Silver standards.

Nelson says The Renaissance was conceived as a green development and those attributes were critical to winning financing.

“It’s not an add-on,” she says of the property’s sustainable aspects and amenities. “We made the commitment from the onset.”

It’s a commitment that incorporates walking trails and gardens in addition to constructing to the most current energy-efficient methods. Building materials will come from local sources. Rain water will be collected for irrigation. Demolition debris was recycled at a cost that was lower than traditional landfill dumping fees, Nelson says. And her team is looking at the possibility of adding photovoltaic solar panels.

“I feel like I am at the vanguard here in Charlotte,” says Eric Orozco, urban designer for Neighboring Concepts, who is project administrator for The Renaissance’s LEED applications. “There are things they are willing to consider that’s not typically associated with even market-rate developers.”

“It is thrilling to hear that the Boulevard Homes revitalization will be pursuing this certification as well,” Scofield says. “Charlotte Housing Authority’s support of LEED is an asset to their residents and to our city.”

The Charlotte Housing Authority has aggressively pursued green development this past year as part of its model for affordable housing. The agency recently won LEED-Gold certification for a $12.9 million renovation of its 161-unit Charlottetown Terrace, making it the first 100% public housing high-rise in the nation to achieve that level of certification.

Affordable-housing communities, Nelson says, shouldn’t be given short shrift when it comes to quality just because its residents work in low-income jobs. And they can provide a healthier environment, she says, noting The Renaissance will be built using less toxic materials.

In addition, the community’s tenants will be able to take advantage of a child development center and a charter K-8 school that will be built within a short walk from the apartments.

“I think there is a conscious effort to make sustainable living more available to the masses,” says Janelle Brown, the Charlotte Housing Authority’s senior development officer. “We’ve just been learning along with the rest of the country.”

The Charlotte Housing Authority is the master developer for The Renaissance. Its rebranding of the site emphasizes the rebirth of a community. Its street names — including Ascension Way, Triumph Drive and Achievement Lane — reinforce that.

The Renaissance is one of the last projects in the country to win a federal Hope VI grant. The program was started during the 1990s by the U.S. Department of Housing and Urban Development to provide funding to convert deteriorating public housing projects into mixed-income neighborhoods. An emphasis was placed on New Urbanism, a design movement that emphasizes dense, walkable communities. The program has since been replaced with a grant program called Choice Neigborhoods.

Hope VI funds transformed Earle Village in uptown into First Ward Place and The Garden District in 1997. Piedmont Courts was replaced with Seigle Point under the program, just as Arbor Glen was developed out of the former Dalton Village public housing site.

Boulevard Homes was built in 1969 at the corner of West Boulevard and Billy Graham Parkway and had been home to as many as 900 people in 300 units. It’s also know as the site of the fatal 1993 shooting of Charlotte Mecklenburg Police officers John Burnette and Andy Nobles.

Today, the former crime-plagued public housing campus — from the buildings to the streets — has been largely stripped down to 41 acres of red clay.

Construction is under way on that blank slate. Crews have begun work on The Renaissance’s first major building, a subsidized four-story apartment complex for senior citizens. The Retreat at Renaissance building will have 110 one-bedroom flats for elderly residents who subsist on 60% of the area’s median income or less.

In addition, funds were leveraged though the Hope VI program ($1.25 million), a state tax credit loan ($1.1 million) and a commitment from the city’s Housing Trust Fund ($1 million).

The next phase of development calls for 224 mixed-income units at The Residence at Renaissance. Construction starts in 2013. Funding announced thus far is $865,439 in annual tax credits from the N.C. Housing Finance Agency for 74 family units.

Units will be available for tenants making as little as 30% of the area’s median income, which is about $20,550. But Nelson says market-rate apartments also will be built and incorporated into The Renaissance.

Rent will vary by number of family members, unit types and income levels, but they will range from $305 to $765.

The company also earned sustainability credibility for its construction of Proximity Hotel in Greensboro, the first LEED Platinum hotel built in the U.S. In 2007, its own North Carolina office was the first commercial building in the state to achieve LEED certification.

Leeper Construction has participated in some of the highest-profile projects in uptown, including Time Warner Cable Arena, Mint Museum, Harvey B. Gantt Center for African-American Arts + Culture and the Duke Energy Center’s underground parking.

“We’ve been involved in a lot of iconic buildings,” says Ron Leeper, company owner, who adds that he has a personal stake in The Renaissance. He describes working on The Renaissance as an opportunity to “be a part of changing what, I think, is the lives of people in an entire community.”

Click here to read the original article in the Charlotte Business Journal.