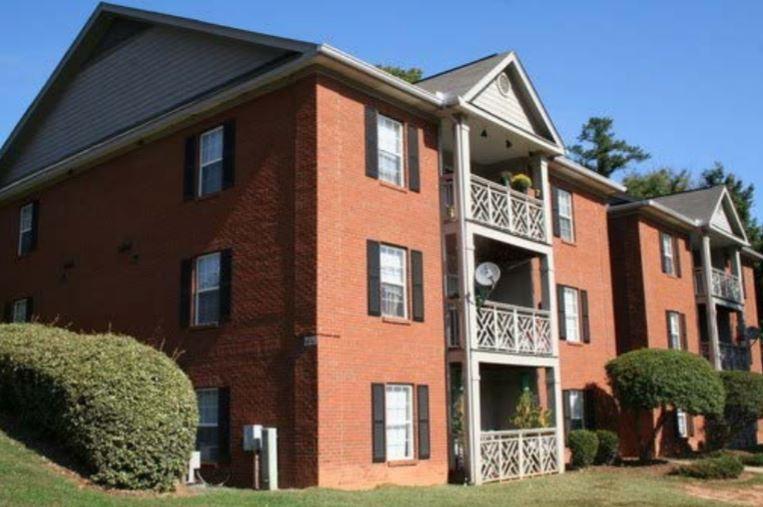 But neighborhoods keep gentrifying and rents keep rising. The average apartment now goes for $1,205, according to Real Data – up about 12 percent in two years. And the city still has a large shortfall of affordable housing, estimated at 24,000 units.

So the city has a new strategy.

In February, Charlotte City Council approved spending $2.1 million on the Sharon Oaks apartments. Two investors – Ascent Real Estate Capital and Laurel Street Residential – are in the process of buying the complex this month, and will use that money to fix up the complex.

Amos Grey lives at Sharon Oaks and said it’s a particularly good deal. He pays $925 for a two-bedroom apartment.

“Rents are going up and it’s frustrating,” he said. “It’s hard to rent these days. About $1,100 is the average.”He said he has a pretty good deal. “Yeah, it’s a decent deal with two bedrooms, and the conditions and all that,” he said. In east Charlotte, there are thousands of apartments built in a 10-year window, from the early 1970s to the early 1980s. Sharon Oaks is a little different. It has a few one-story buildings built in the early 1960s, and then some three-story buildings built in the early 1990s. Deljuan Alexander works at the Amazon fulfillment center in Concord and has lived at Sharon Oaks for four months. “It does need a tune up,” he said. “It could take a nice tune-up to be efficient. Maybe water pressure could be better. Some of the kitchens and bathrooms probably could be tightened up a little bit better. As far as flooring, maybe newer carpets maybe.” Deljuan Alexander has lived in the Sharon Oaks apartments for four months.

Pam Wideman, the city’s housing manager, said that money will pay for things like deferred maintenance. Charlotte can spend $50,000 per unit to subsidize new low-income apartments. It intends to spend $21,000 per unit at Sharon Oaks. The city likes that math – especially if an apartment complex is going to be sold to a new investor, who might raise rents. But to preserve 24,000 units at $21,000 each, Charlotte would need more than $500 million. All told, the city and private donations have reached nearly $170 million. That includes low-interest loans from banks. And there is another question: Can the city really know when an older complex is about to be sold, with a new investor planning to raise rents?

Mark Ethridge, a partner at Ascent Real Estate Capital, said there is no way to know for sure. But he said the city can make an educated guess about what’s happened to property values nearby.  “We think the Monroe Road corridor is changing,” he said. “And we have seen properties in this submarket and adjacent submarkets be taken from rents that were affordable at 50, 60 percent AMI (area median income) with rental increases that have gone up $200 and $300 a month.” For years, the city’s goal was to disperse low-income housing throughout the city, to not create concentrations of poverty. But because of the high cost of land in affluent areas – as well as neighborhood opposition – that plan failed.

City Council member Matt Newton, whose district includes the Sharon Oaks apartments, is worried the city may be concentrating too many low-income residents in the complex. He lobbied his colleagues to reserve more of the apartments for people making 80 percent of the area median income. That’s about $43,000 a year. Other council members refused. They said the greatest need was for the city’s very poorest residents. Newton ended up voting for the Sharon Oaks investment and celebrated the preservation. “So in any affordable housing development, we want to make sure that we have a true mix of incomes,” Newton said. “And we have seen in studies, including the Leading on Opportunity study, [that] is the utmost ability for upward economic mobility.”

Sharon Oaks has always been a pretty good neighbor, said Randy Montgomery, who lives in a single-family home that backs up to the complex.  “The housing behind us — there ain’t no gunshots or anything,” he said. “It’s pretty fair over there.” But he’s worried about lost opportunity. If the city wasn’t involved in Sharon Oaks, he says someone might buy it tear it down and build homes or luxury apartments. That would increase the value of his house, he said. “So hey, they might say, let’s offer these guys this whole corner here – cause all these are acre lots. And if they do good there, they might just keep on coming. And I might get double my money,” Montgomery said.

The city plans to help renovate the 98-unit Sharon Oaks apartments in east Charlotte. Amity Gardens is a neighborhood of single-family homes across the street from Sharon Oaks. Neighborhood association president Amy Harris likes the idea of keeping the apartments affordable. “I feel like too often, we don’t use what we have,” she said. “It’s an investment in this area because of the Monroe streetscape and all that’s going on. Let’s help people. Let’s use what we have.”

Over the next year, the city wants to keep doing that, by investing in even more complexes. It just needs willing partners.