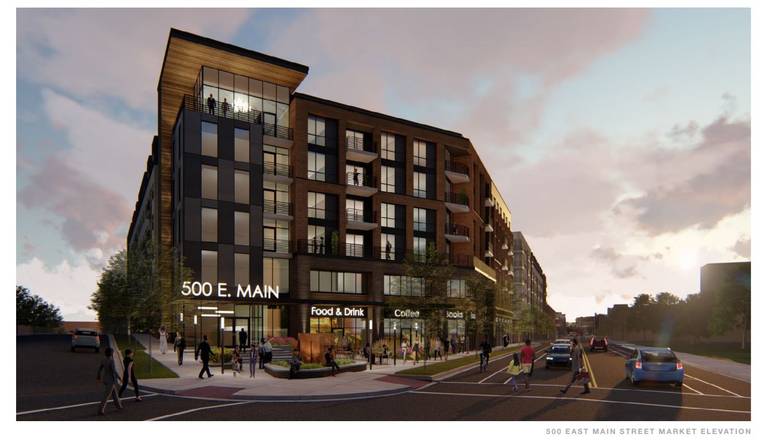 Dionne Nelson has spent her career building affordable and mixed-income communities, she says.

“The growth of Durham and in many respects, the transformation of Durham is very attractive,” said Nelson, the company’s president and chief executive officer. “There seems to be great alignment and support around affordable- and mixed-income housing,” she said. “And I think that’s a rare attribute for us to find in a city.”

The project comes amid a downtown housing boom.

Years ago surface parking lots typically became parking decks to meet growing demand. Today people want to live, work, shop and park, if they have a car, in one place. The county’s plans for the parking lots in the 300 and 500 blocks of East Main Street reflect this trend. “I think what happened in Durham is the commissioners realized they had an opportunity to think about it differently,” Nelson said. “And they were willing to do that. So that makes it exciting and different. I think the transformation of East Main is a rare opportunity that has the potential to really change the downtown dynamic.”

Commissioners Chairwoman Wendy Jacobs agreed. “This is a monumental project for Durham County and our community because we’ve never done anything like this before,” she said.  Laurel Street has built 26 communities with affordable homes in Charlotte, Greensboro, High Point, Salisbury and Winston-Salem as well as in Rome, Georgia, and Richmond, Virginia, said company vice president Lee Cochran. Nelson started the company in 2011 after working at Crosland where she oversaw affordable-housing development and operations.

Commissioners Heidi Carter and James Hill said they were impressed by the diversity of Nelson’s company. “The diversity is really inspiring, and that’s what we want to be fostering,” Carter said. “We excited about working with an African American, female-owned business.”

Nearly a third of all households in Durham County spend more than 30% of their income on housing and utilities, according to the N.C. Housing Coalition. Among renters, it’s almost half.

Jacobs said she expects public employees like first responders, librarians and social workers as well as those who use housing vouchers to live in the East Main Street project.

The affordable units will be offered to people who make up to 80% of the area median income, which for Durham is $37,750 for one person, $43,150 for two people and $53,900 for a four-person household. Units also will be offered to people making up to 30% and 60% of the AMI. Housing advocates like Durham CAN (Congregations, Associations and Neighborhoods) have pushed city and county leaders for years to use downtown land for affordable housing. About seven months ago, commissioners voted to make affordable housing part of the East Main Street properties’ redevelopment plan. Then came retail.

The proposals presented by the three companies vying for the partnership agreement with the county all included a retail element.

The county had approved including 277 affordable units in a total 437 apartments slated for the paring lot sites, The News & Observer previously reported. But Laurel Street’s plan calls for 305 affordable units in two buildings, as well as 250 market-rate apartments in another building at 500 E. Main St., developed by ZOM Living.

Cochran said they added the extra apartments by reconfiguring the units around three sides of the parking garage at the 300 building rather than having them only on two sides. This building will have 105 affordable units. Another building on the 500 block will contain 200 affordable units. All the units will meet the size requirements prescribed for affordable housing to get the tax credits and financing for the development, he said.

County Manager Wendell Davis will negotiate a memorandum of understanding with Laurel Street. The company already plans a possible grocery store and daycare. A forum in August will ask the public what else should be in the project. “This is a wonderful opportunity if we can get it right,” Commissioner Ellen Reckhow said. “It will activate Main Street and score a home run for us.”

Planning will continue for the next year with construction tentatively set to begin in late 2020, according to county staff.