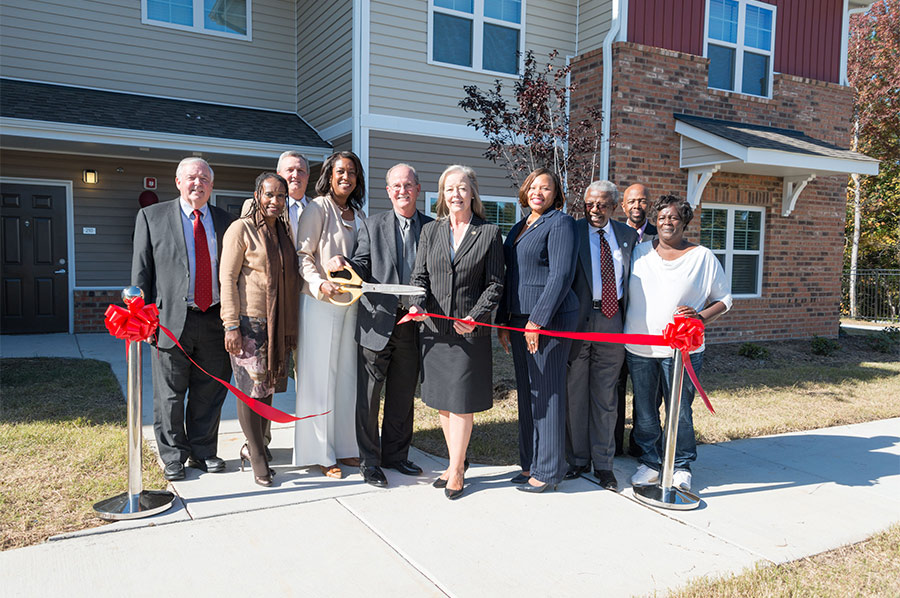 Salisbury, N.C.  October 20, 2015 – Laurel Street Residential, master developer for the redevelopment of the former Civic Park Apartments, in collaboration with the Housing Authority of the City of Salisbury (SHA) and the City of Salisbury, proudly announce the grand opening of the newly renamed Brenner Crossing, a mixed-income apartment community, to be held on Thursday, Oct. 22, 2015, at 2 p.m. The celebration will feature several speakers, including Salisbury Mayor Pro-Tem Maggie Blackwell and Michael Williams, director of the Greensboro Office of Public Housing, who will welcome new residents to the mixed-income community.

“We are thrilled to see Phase I of Brenner Crossing completed,” said Dionne Nelson, principal of Laurel Street Residential. “The community offers working families a stable and beautiful place to live. Similar to other mixed-income communities we’ve redeveloped across North Carolina that have strengthened their neighborhoods, we expect Brenner Crossing to contribute to the revitalization of the West End community.”

In 2012, The City of Salisbury and SHA were awarded a Choice Neighborhood Planning Grant from the U.S. Department of Housing and Urban Development to develop a Transformation Plan for the West End neighborhood. As part of that plan, SHA applied for and received an award from HUD’s Rental Assistance Demonstration (‘RAD’) program to redevelop the 80 units at Civic Park Apartments into a 170-unit mixed-income community, including replacing the 80 units at Civic Park. The new community, renamed Brenner Crossing, brings high-quality, affordable rental housing to a community where this is greatly needed, and it will be a logical complement to the significant, ongoing revitalization of the single-family portions of the West End neighborhood.

Phase I of Brenner Crossing is comprised of 80 apartments designed for working families at 60 percent of the area’s median income or below. The units are one-, two- and three-bedroom apartments located within two- to three-story garden-style buildings on a 6.38-acre site. 36 of the 80 units are supported by a rental assistance contract from HUD, allowing Brenner Crossing to serve families at a broad range of incomes.

“I am thrilled for the residents who formerly lived in the outdated Civic Park apartments, and other new renters, who now have the opportunity to live in some of the prettiest apartments in Salisbury,” said Sam Foust, executive director of Housing Authority of the City of Salisbury (‘SHA’). “I am very thankful to our development partners, architects, and the investors and lenders who helped SHA to make this possible for the City of Salisbury and Brenner Crossing residents.”

Phase II of the project, which started in September and is slated to be completed in late 2016, will add another 90 new affordable housing apartments and additional amenities. When the second phase is complete, amenities on site will include:

Phase I was funded through a $700,000 allocation of federal tax credits by the North Carolina Housing Finance Agency (NCHFA). This tax credit allocation was sold to Red Stone Equity Partners to provide approximately $6 million of equity towards the development, which equates to about 60 percent of the project’s $10 million of total development costs. Remaining costs were funded by a construction loan from Fifth Third Bank, a permanent loan from The Community Development Trust, and subsidized loans from the NCHFA, the Housing Authority of the City of Salisbury, and The City of Salisbury. The same financial partners will participate in Phase II. Phase I and II combined represent a $24 million investment in the West End community.

The developer and housing authority were mindful of the Civic Park families throughout the transformation. Since Phase I was constructed on vacant land acquired from Livingstone College, only a small number of residents needed to be temporarily relocated to other SHA public housing communities during Phase I. Phase II required additional temporary relocation of Civic Park families, who were given the highest priority to return to Brenner Crossing. Many families returned when Phase I was completed and more families will return at the completion of Phase II. Subsequently, these residents will be integrated with other working families at different income levels in the new mixed-income community.