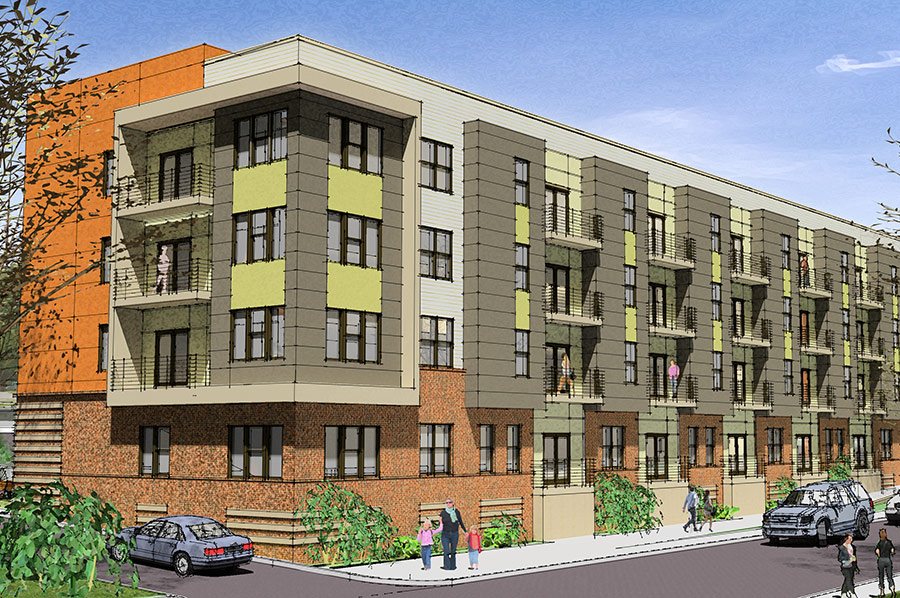 The complex is unique among downtown Winston-Salem residential developments in that it will offer a quarter of the units at “workforce housing-level rents,” said Dionne Nelson, CEO of Laurel Street Residential.

“We’ve been working on this development for some time now, so we’re excited to be moving dirt,” Nelson said. “It’s good to see that corner with some activity on it.”

The complex will have studio, one- and two-bedroom units with amenities that include a fitness center, a yoga studio, a game room and a patio with grilling areas.

Nelson said Laurel Street has been working on the development with Goler Community Development Corp., which is also an investor in the project, and the city of Winston-Salem for more than a year.

Nelson said her group has developed more than 1,500 units and with an investment of more than $180 million in projects, with a particular focus on developing mixed-income communities.

Rents at the complex, named 757 North, will range from $740 to $1,550. Those set aside for workforce housing-level rents will be available to renters making 80 percent or less of Winston-Salem’s median income, with rents ranging from $740 to $850, Nelson said.

“It’s going to present the opportunity for people to live very close to where they work in a growing downtown district,” Nelson said.

The city of Winston-Salem is supporting the project through a $1.25 million subsidized loan approved late last year to be repaid over 20 years as well as a $325,000 land grant.

Along with Goler, Northridge Capital of Washington, D.C., is also an investor in the project, with NewBridge Bank providing a $9.4 million loan.

Winston-Salem is seeing increased investment in residential projects in downtown.

GEMCAP Cos. is progressing on Twin City Lofts, a $10 million-plus development including 21 high-end luxury condos at Fourth and Marshall streets that is expected to be completed this summer.

Read the original article in the Triad Business Journal.